How Long Do Shroom Last In Your Body? When preparing to take magic mushrooms, one of the first things people ask is how long their trip will last. Experienced shroomers know it is usually in the realm of a groovy 4 to 8 hours. A question less people ask, however, is how long magic mushrooms actually stay in their system. Many people don’t want to have to deal with the after-effects of drugs in their bodies for days on end — even overdoing it on the booze on a Saturday can leave you befuddled until Tuesday! Additionally, as drug screenings are becoming more and more common both at work and school, this has caused some to wonder if taking a psychedelic trip is worth the risk… (Spoiler alert: the risk is very little.)

The good news is, magic mushrooms don’t stay in your system for very long. Right after you eat them (around 20 to 40 minutes), the psilocybin in shrooms gets converted into psilocin. This resulting chemical is what signals your brain to trip out and act, lets say, unusually.

Now it gets interesting!

Duration of a Shroom Trip

For the onset, to up to 8 hours later, you’ll enjoy the psychoactive effects of magic mushrooms. These can include an out-of-body feeling, fantastic swirling colors, and bright lights, among other visuals. how long do dry magic mushrooms last

Now of course, how long and how intense your trip eventually becomes will depend on your typical dosage. So make sure to check out this table right here:

How Long Do Shrooms Last in Your Body?

If you’re a first-timer wondering how long magic mushroom remnants will remain in your body, you needn’t worry too much. After 24 hours, give or take, all traces of shrooms will be flushed out via urine.how long does a magic mushroom trip last

But if you trip out regularly (like every day) and pause, then you can expect the last bits to remain for up to 3 days.

How long shrooms stay in your body relates to the time it takes to remove half of the substance from your blood. This is called elimination half-life. For psilocybin, the half-life is 160 minutes. For psilocin, it’s just 50 minutes.

So both psilocybin and psilocybin are flushed out in the urine rather quickly as a result. Within 13 hours, more than 95 percent of psilocybin is gone. The same ratio of psilocin is also urinated after 5 hours. how long do magic mushrooms last 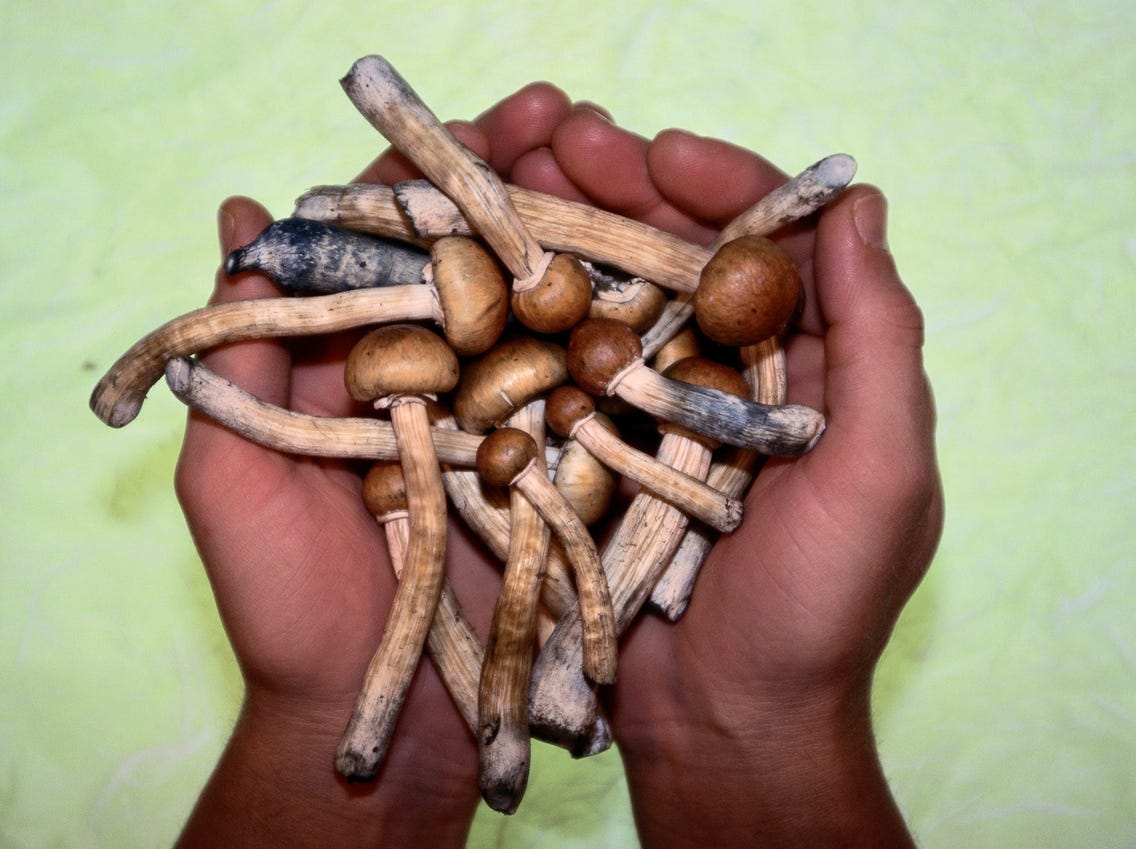 But What If There’s a Drug Test?

Most urine tests being sold to the public are not designed to detect psilocybin. So if you’re terrified about losing your job as a result of a drug screening… don’t be! Your secret’s safe (and is likely to remain that way).

Five-panel tests only detect marijuana, amphetamines, opiates, cocaine, and phencyclidine (PCP). Companies may test for additional drugs — such as benzodiazepines and barbiturates — but that requires a 10-panel urine screen test, which is costly. The good news? Both of these tests will fail to detect psilocybin or psilocin, so you need not worry about scheduling your next trip to Wonderland.

Bear in mind, however, that urine tests which can detect shrooms do exist, but they don’t have a wide scope for testing. In 2002, a small study used those tests and discovered that psilocin leaves the body entirely, via urine, in just 24 hours.

(Wanna trip out on Saturday with friends, but turn up sober for Sunday dinner with Mom and Pop? Go ahead!)

We now know that urine drug screenings are a piece of cake. But what about blood tests? Will shrooms show up on them?

As of 2020, the research findings aren’t clear if blood tests can detect psilocybin. Either way, blood tests are rarely given to check if you’re using psychedelics. Urine samples (as the cheaper, easier option) are the norm.

There are a few lab tests that can reveal traces of psilocybin in hair samples, up to 90 days post-trip. But then again, high-tech Tony Stark-level testing is just way too expensive for schools and offices. And hopefully, in the near future, your school or workplace won’t frown upon you expanding your mind with shrooms anyway.

There really are infinite reasons why magic mushrooms are the perfect choice for psychonauts — whether it’s their very first, third or 100th trip. Not only are they an experience that runs such a broad spectrum — from spiritual, to magical, to just damn fun — their therapeutic potential is being proven time and time again. Due to this, countries where they were once illegal are beginning to relax their laws to allow access for medical reasons, as well as to continue research into their manifold benefits. On top of all that, they don’t even overstay their welcome in your body!

So! Maybe you can fit in a psychedelic trip this holiday season? It certainly won’t weigh you down like overdoing it on the mulled wine or eggnog. No hangover in sight!

Certain factors can affect how long shrooms hang around in your system. Many of these factors you can’t control.

Time between ingestion and testing

Hallucinogens like psilocybin are eliminated from the body quickly. Still, the time between ingesting shrooms and testing could be a factor — if the right type of test is used, of course.

The sooner a drug test is performed after taking shrooms or any other substance, the higher the chances it can be detected.

There’s somewhere between about 75 to 200 different species of psilocybin-containing mushrooms. The amount of the hallucinogen varies from shroom to shroom.

The more psilocybin in the shroom, the longer it’ll hang around in the body.

Whether you consume it dried or fresh, scarf it down on its own, hide it in a burger, or drink it in tea, how you consume your shroom dose affects potency and how quickly it passes through your body.

Again, how much you consume plays a big role.

The more you ingest, the longer shrooms will be in your body and possibly detectable.

Your metabolism and kidney and liver function slow with age, which can delay the excretion of psilocybin from your body.

The older you are, the longer shrooms tend to stay in your system. This goes for other substances, too.

Every body is different. No two bodies process substances on exactly the same schedule.

Things like your body mass index (BMI), metabolism, and water content all affect how quickly things are excreted from your body.

What’s in your belly

How much food and liquid is in your stomach when you take a dose of shrooms affects how long they hang around.

The more food that’s in there when you do shrooms, the slower they’ll move through your digestive system.

When it comes to water, hydration speeds up psilocybin excretion.

Using shrooms with other substances can lead to both unpredictable effects and time in your system.

If you drink alcohol or take any other substance with shrooms, it could affect how it’s processed by your body. There’s also the chance that the other substance will be picked up on drug test, even if the shrooms aren’t.

It’s also important to consider the possibility that the shrooms you get could be laced with another substance.

Are there any ways to get it out of your system faster?

Drinking water can help move it through your system a bit faster, but not enough to make a significant difference if you’re trying to avoid detection.

Your best bet is to stop doing shrooms as soon as possible if you’re worried about detection.