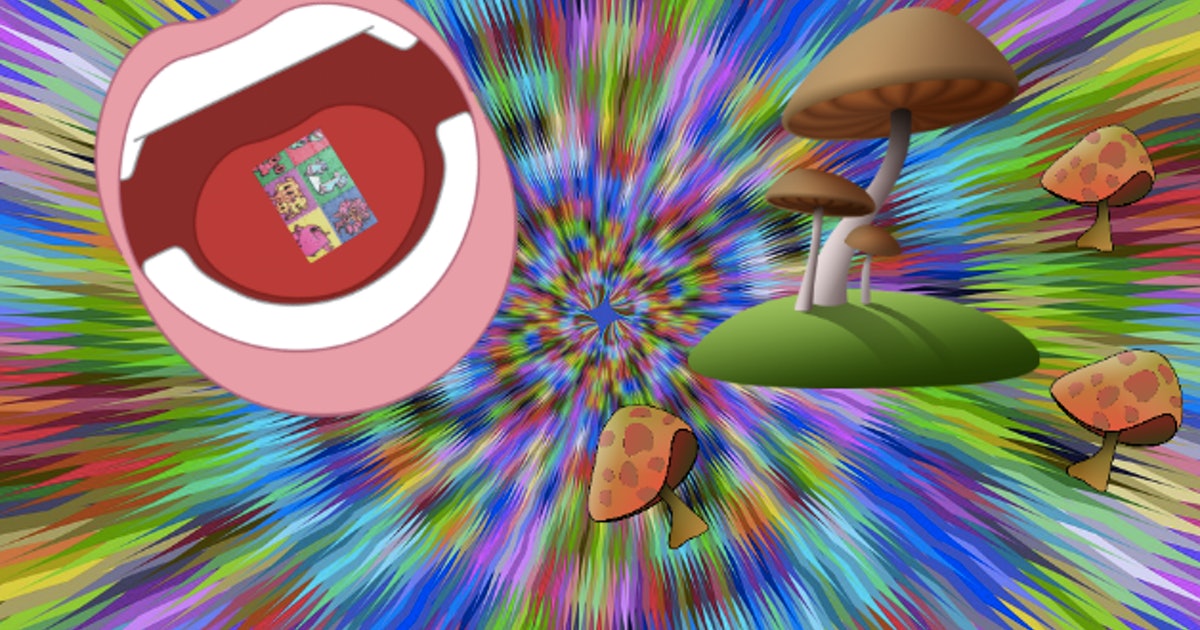 If what you want is a magical trip full of hallucinations and other trip effects, you can get that from either of these two psychedelic products. Both of them are major sellers in the psychedelic market, and they also possess the potential ability to be used as an effective treatment for several mental ailments. From this description, it sounds like they are very alike. There are similarities, but there are also many differences between the pair. The most obvious one is that magic mushrooms occur naturally while LSD is made in a lab. One of them will give you a calm, creative, and earthy feeling, while the other will provide you with a wild and long trip. They are both amazing creations, but which one you favor will depend on your taste.

Made In A Lab
LSD is a synthetic drug, so it was developed by humans and made in a laboratory. The full name is Lysergic acid diethylamide and it was first synthesized by Albert Hofmann. He derived the drug from lysergic acid which is what provides the substance with its lack of taste, color, or odor. If you’ve ever heard of bicycle day, it is a day celebrated by psychonauts around the world to mark a historic day in the world of psychedelics. On April 19, 1943, Hofmann took the first deliberate acid trip by taking 250mcg of LSD. He then hopped on his bicycle and went for a ride while tripping hard on LSD. Every year on the 19th of April, psychonauts now have an acid-soaked paper tab or a couple of LSD drops right on the tongue. According to Albert, the first-ever deliberate acid trip felt like a dream, with a constant rush of fantastic imagery, pictures, colors, and shapes on display.
LSD is purely made in a lab, although the plain lysergic acid is blended with ergot. If you don’t know what ergot is, it is basically a mold that naturally grows on grains. Even though LSD is lab-made, its molecular composition looks very similar to that of psilocybin that is found in magic mushrooms and truffles. This creates the question, are they related in some way?

The Magic Of Mushrooms
Magic mushrooms and truffles are quite different from LSD in that they grow naturally. Places like Mexico, the USA, and South American countries are suitable locations where psilocybin products grow. There are more than 200 different species of shrooms but the most popular species is the Psilocybe. There are several ways that magic mushrooms and truffles can be consumed, with the most familiar being just munching on them. You can decide to chop up your shrooms and brew them into a tea or even mix it in with some lemon or milk for a sweet and enjoyable psychedelic trip.

Both magic mushrooms and LSD can take you on a pretty memorable trip. But where shrooms will give you a soft and cozy trip for a maximum of about 8 hours, LSD will give you strong and wild visual hallucinations for up to an entire day. The question that needs to be asked is, how long and how harsh do you want your trip?
The way LSD works is by making your body think it is serotonin (the happy hormone). This allows it to enter the nervous system and access the brain. Once the LSD gets into the brain, the visual cortex which is responsible for us only seeing what is there crashes. After this, then the visual acid trip commences, and it could carry on for up to 20hours. There is a range of emotions that can and probably will be encountered during just one LSD trip. But the amazing thing about this substance is the time and space distortion. After tripping out for more than 20hours, a vast majority of the users will go on to comment how it felt much quicker than that.
The mode of operation of magic mushrooms is quite different from LSD. They also work to alert the serotonin receptors, but before the effects can be felt on your brain, your liver will need to break the substance down into psilocin. This breaking down itself can take up to an hour to complete. Eventually, the psilocybin will be fully broken down and it will enter the blood, the brain, and then the amygdala. If you didn’t know, this is the organ that processes fear in the body, which explains why psilocybin is so effective at boosting the feeling of anxiety. Psilocybin also works to break the connection between the anterior and the fronto-insular cortices, which will lead to ego death. This results in serious time-space distortion and mild hallucinations. But the biggest part of the psilocybin trip is probably the sense of spiritual awareness and a boost in the feeling of creativity. Wisdom and clarity are two qualities that you should expect to enjoy after taking psilocybin substances.

Pricing
Silicon Valley can be used as a prime example of the recent rise in the activity of psychedelic microdosing. Because of their ability to boost creativity, these magic mushrooms are now taken by tech geniuses to increase their efficiency or even treat depression and anxiety. The unfortunate part though is that most of these tech geniuses continue to use street dealers to get their substances instead of purchasing them from legal online shops. As of 2019, a 50-150mcg tab or LSD costs about 20dollars on average. And because of the pandemic and other economic factors, it is most likely that the price has increased. LSD is mainly used as an avenue to escape reality. With the current pandemic and situation that many people are currently going through, it is no surprise they are now using psychedelics as a therapeutic mechanism.
Microdosing magic mushrooms and truffles are much cheaper than LSD, and if you order from a reputable and trusted online store, you should get a 6gram strip of psilocybin truffles for about 8dollars. You shouldn’t expect a crazy whirlwind of effects to hit after just one microdose of psilocybin, but when you take it regularly every three days, you will begin to experience enhanced creativity and happiness. If you are looking to grow your own magic mushrooms, then getting a single and easy-to-use cubensis grow kit with pre-grown spores can give you a harvest of up to 160grams. That can save you a lot of money while providing you with great magic mushrooms.

Your Choice
A wild acid trip, or soothing creativity boom? The decision is yours to make, but you will thoroughly enjoy whichever one you eventually select. Both magic mushrooms and LSD are extremely popular hallucinogens and they can lead you into a higher state of awareness and consciousness. They are also becoming the most sought-after substances for medical researches, with a range of clinical studies being performed on them. These substances have the potential to be used to treat PTSD, resistant depression, and anxiety. It is your choice and you can select from the variety of psychedelic products on sale at Trippy Life shrooms. Here, you will get world-class products at low prices. Check out the Trippy Life website, purchase some nice psychedelics, and have an awesome trip!

2 thoughts on “Magic Mushrooms or LSD”